Back on the move, we went out into the “dolphin grounds” to see if we’d have better luck today finding them. (If a dolphin doesn’t want to be found, they’re pretty good at hiding.)

This is where I ended up spending a fair amount of time, after my sunburn the first day. In true nerd fashion, the Sun and I are mortal enemies, and it constantly seeks to destroy me. While the front webbing was usually covered with a sun shade, even through that, I felt the pain of the burn worsening. On the bright side though, it gave me the opportunity to talk to the crew, and learn about the boat and have some nice light conversation. 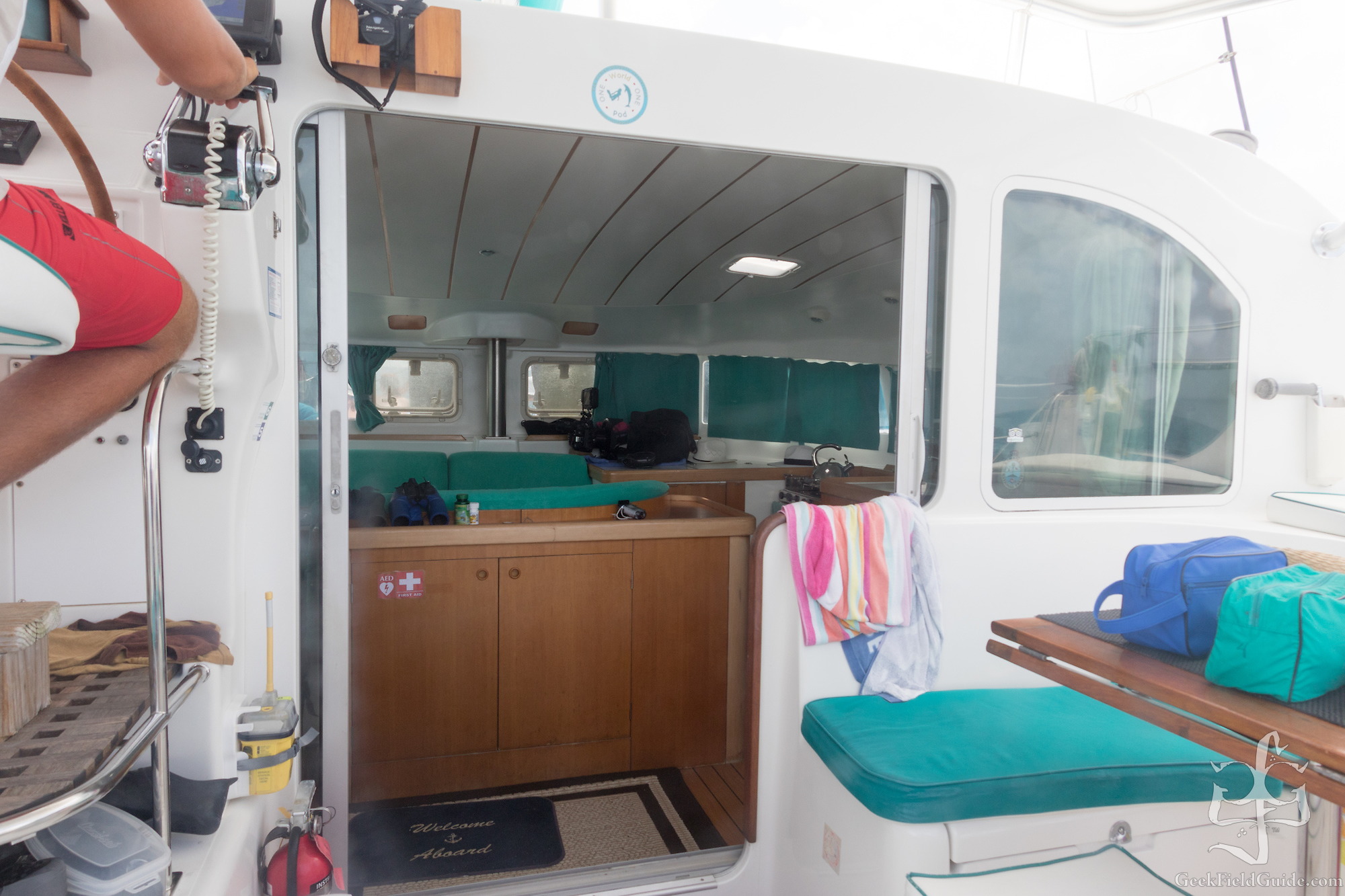 Cabin and rear deck of the DolphinQuest (Warren Schultz)

Around 3pm, we finally had luck. A pair of dolphins appeared in front of the boat with little warning. 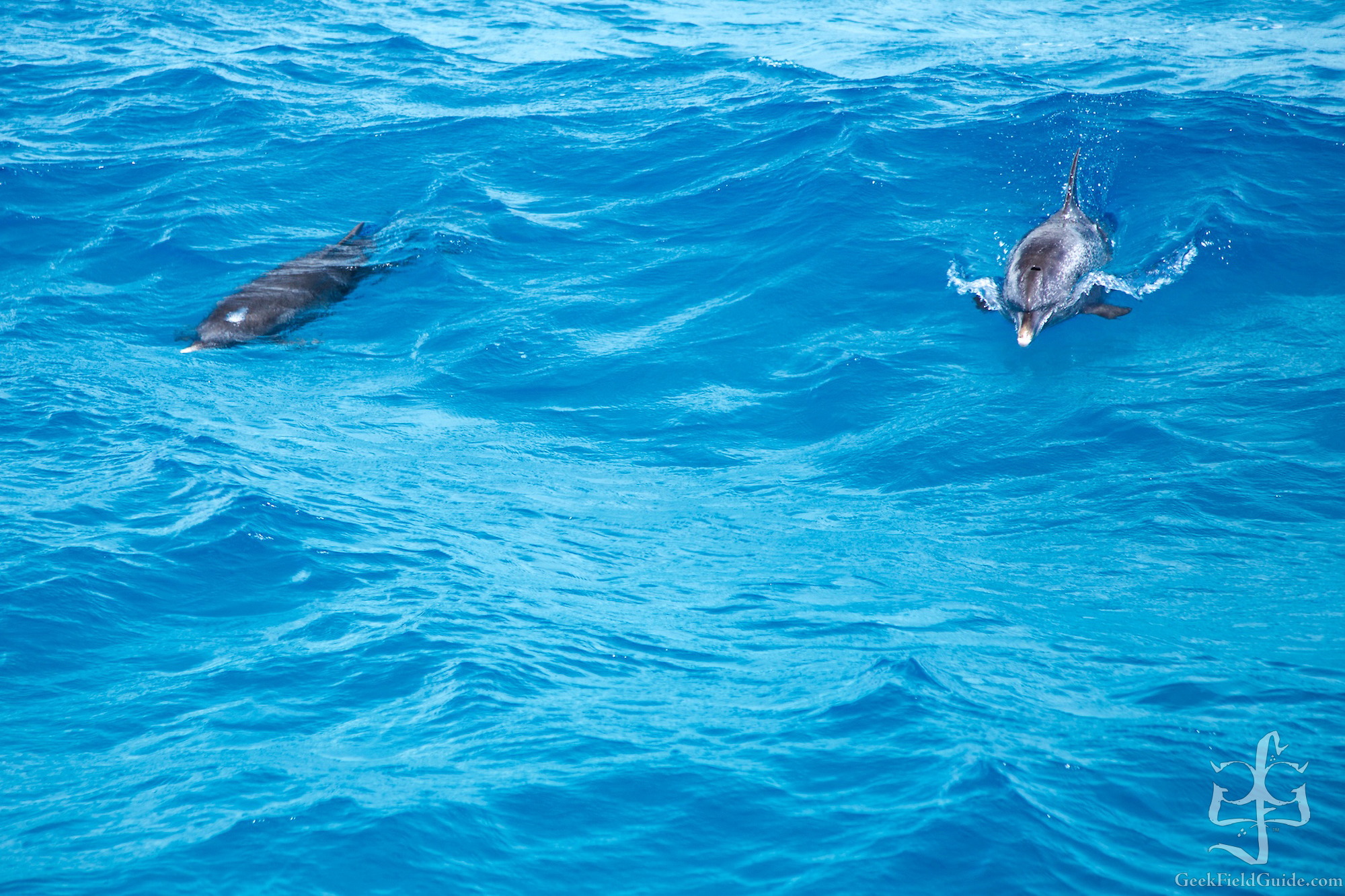 As I alluded to in the title, the dolphins we saw were Atlantic spotted dolphins. 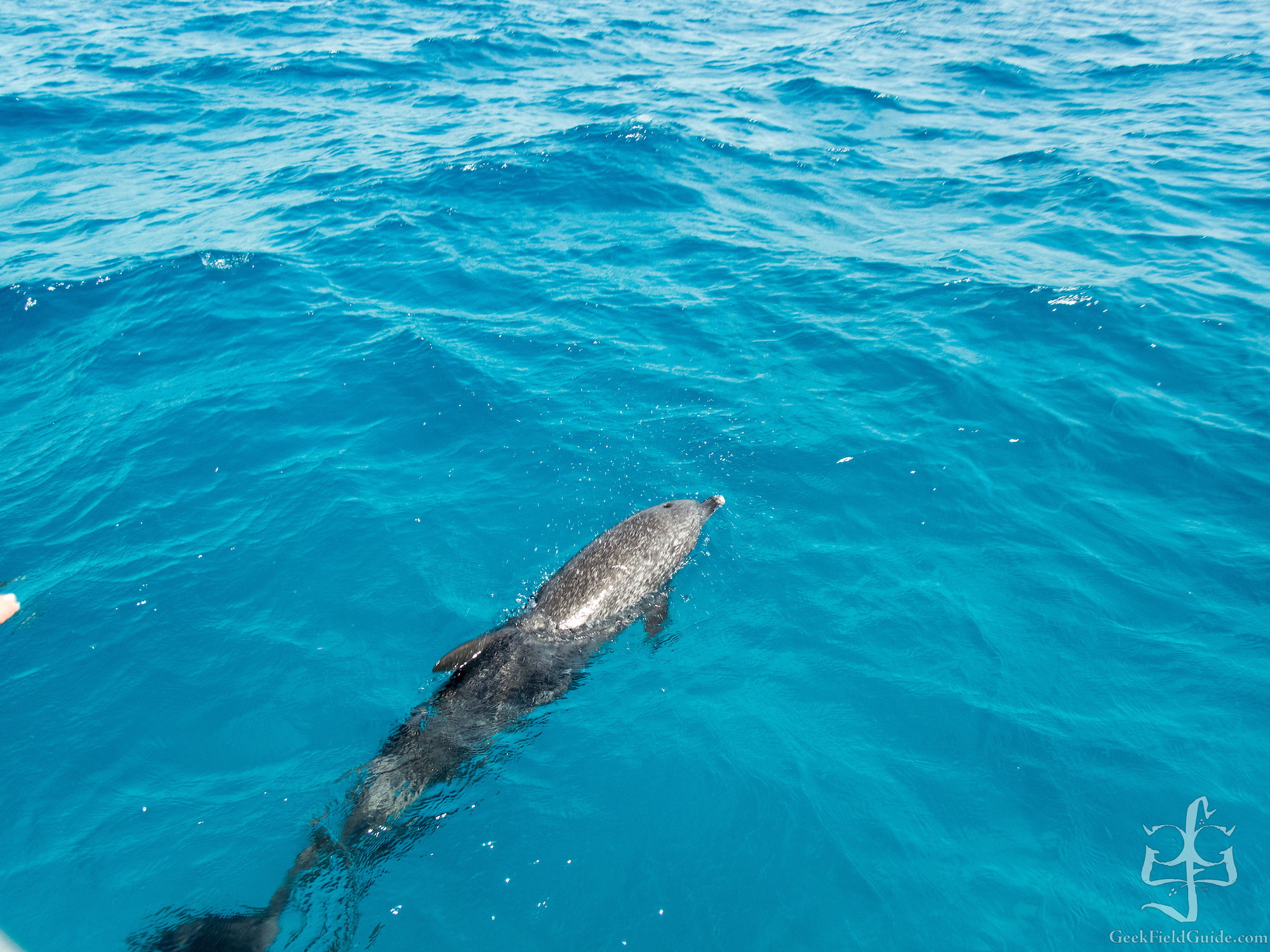 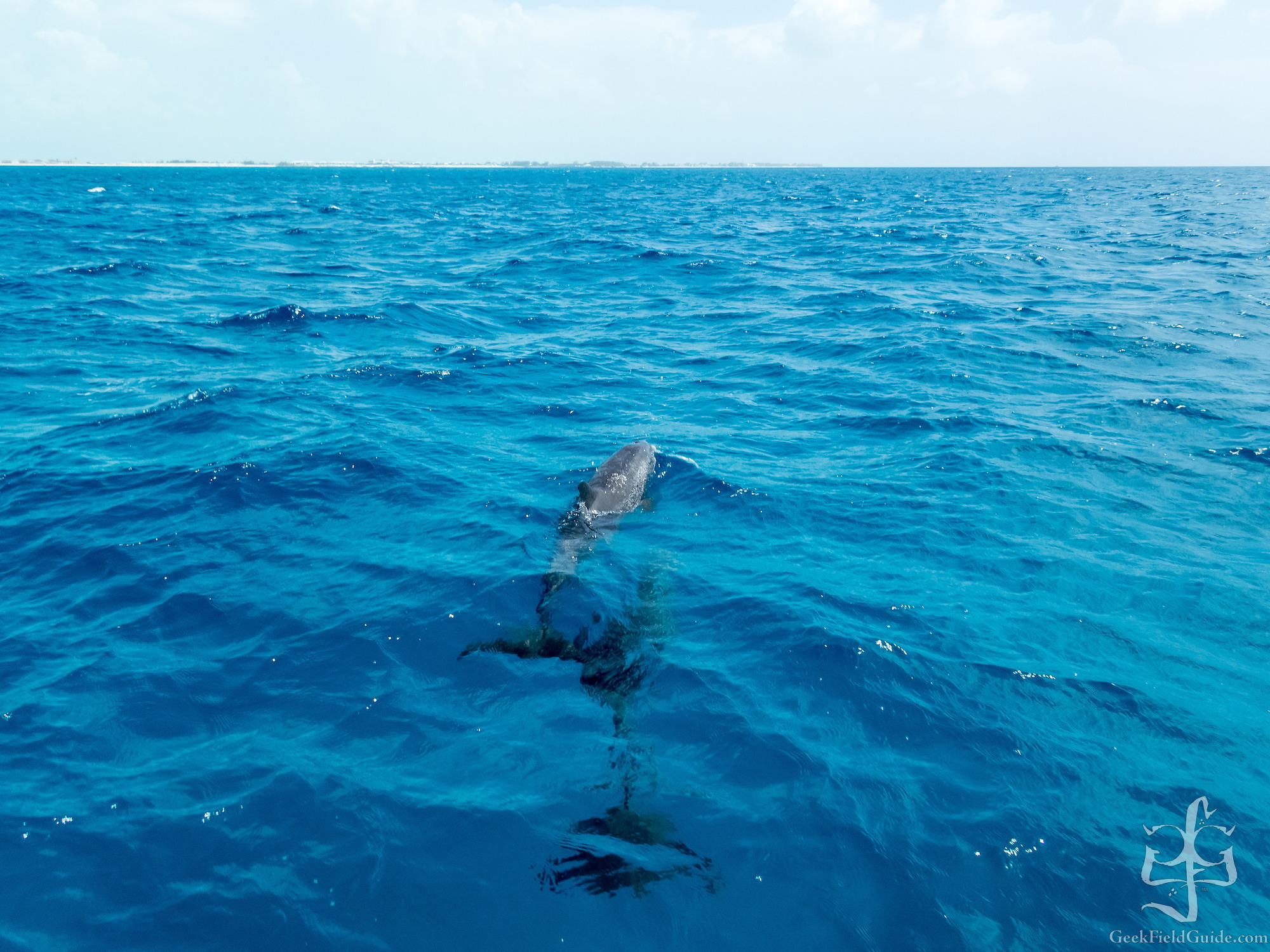 So, it may sound strange to say, but it didn’t feel quite real. They were right there in front of me, but it still felt like an attraction at a park, vs. happening upon wild animals in the middle of the ocean. 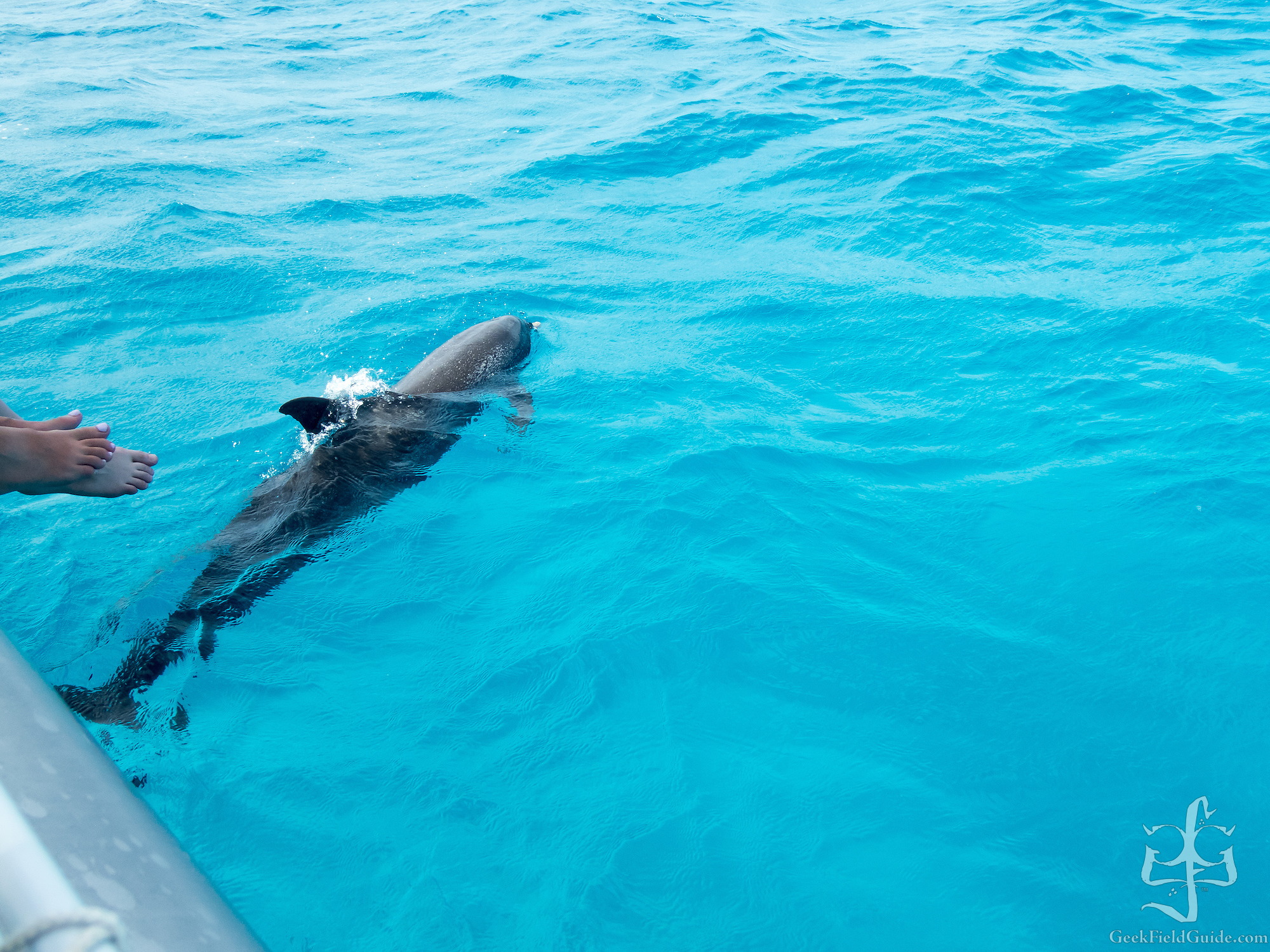 Yes, they really were that close to the boat. They just cruised along ahead of, to the side of, or behind us. (Margaret Coin) Buy this photo

And yeah, it’s one thing to see dolphins swim alongside a boat in a movie, but watching them at that distance, it’s an entirely different experience.

So, this is where things get interesting.

The way that WildQuest normally has people go into the water with the dolphins, they will cruise along with the pod for a while and wait to see if they decide to take a break, or look particularly interested in play. Failing that, we get ahead of the pod, and go into the water as smoothly as possible, and wait for the dolphins to swim by, and see if they decide to stick around or not. Worst case, they avoid us entirely. Slightly better alternative, they buzz by and we get to see them a bit closer and share the ocean with them. Best case, they hang around and play with us.

It was time to see what kind of luck we had.

As it turns out, we had them decide to give us a wide berth in general on several attempts. Before everyone made it into the water, the dolphins would already be gone, and they’d start rapid-recovering people to make another attempt without falling too far behind. Each time we made an attempt, they’d rotate through who went in first, to give different folks a chance of seeing them, even if briefly. (These dolphins weren’t in the mood to play, apparently they had an appointment.)

Finally, on the last attempt of the day, it was my turn to go first and see what I could see.

Apparently, dolphins have a sense of humor. (Actually, this is a real thing.) Specifically, they seem to be able to sense photographers and know how to mess with them.

As soon as I got in the water, I was swimming on my back and getting the camera ready, heading towards where everyone else had swam. All of a sudden, I get a bunch of people yelling to turn around. Sure enough, they were right there. And I, somehow, had managed to switch the camera off while getting ready. (I’d taken a lot of inadvertent shots previously, so I was leaving the power off until I hit the water.) Lesson learned. Go in immediately ready to shoot next time.

This is what it looked like from the surface. 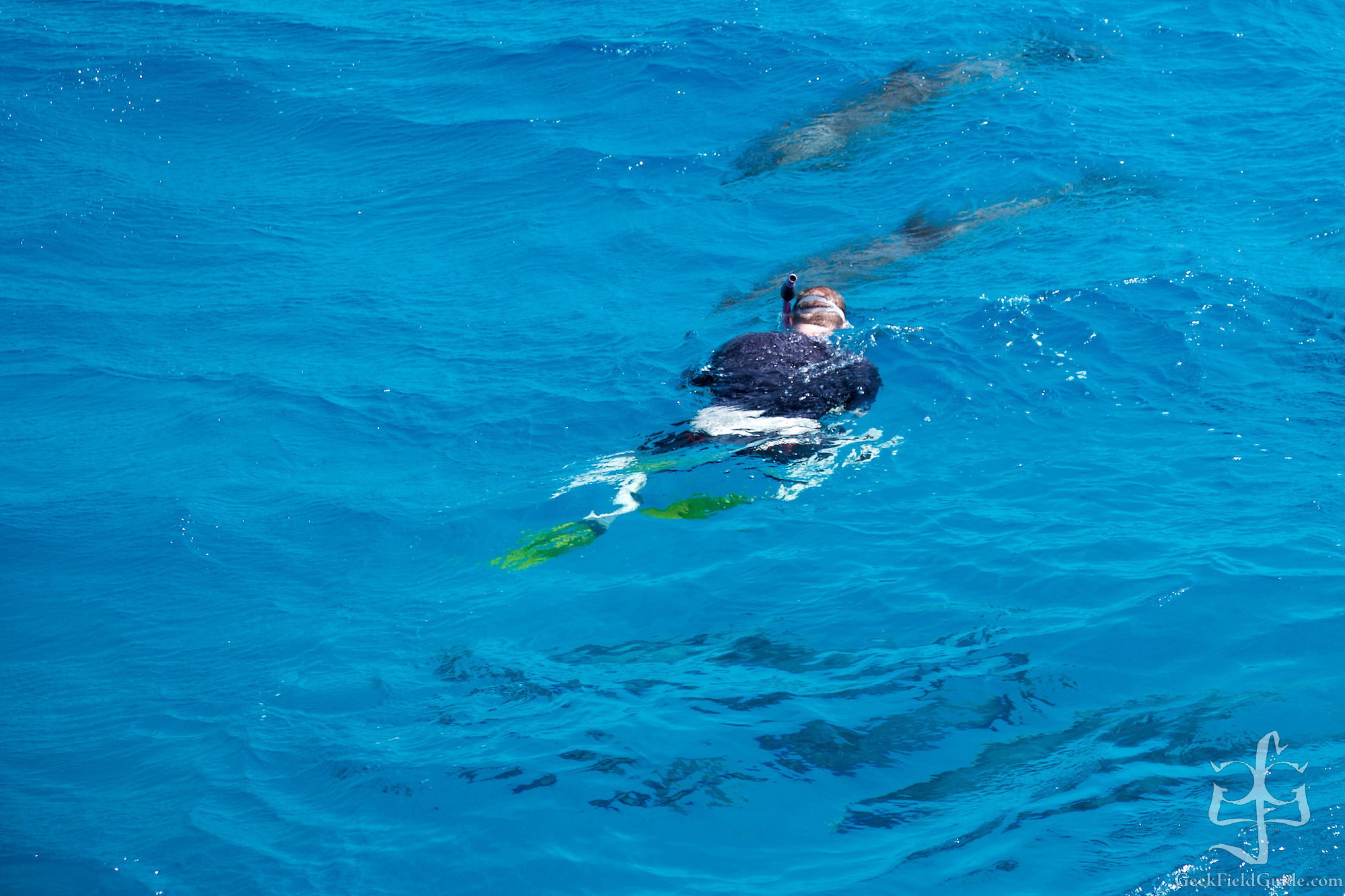 My glorious moment of *almost* getting the shot. Yes, the ones in front were really that close. The ones “behind” me were somewhat deeper. (Atmoji Photography)

It is a testament to the Canon 7D Mk II that it was able to spin up from cold, autofocus, and start shooting full speed as fast as it did. The photo above was taken right about the time I first saw the dolphins. Yeah, I wasn’t kidding. right there.

This photo was probably taken less than 2 seconds later. 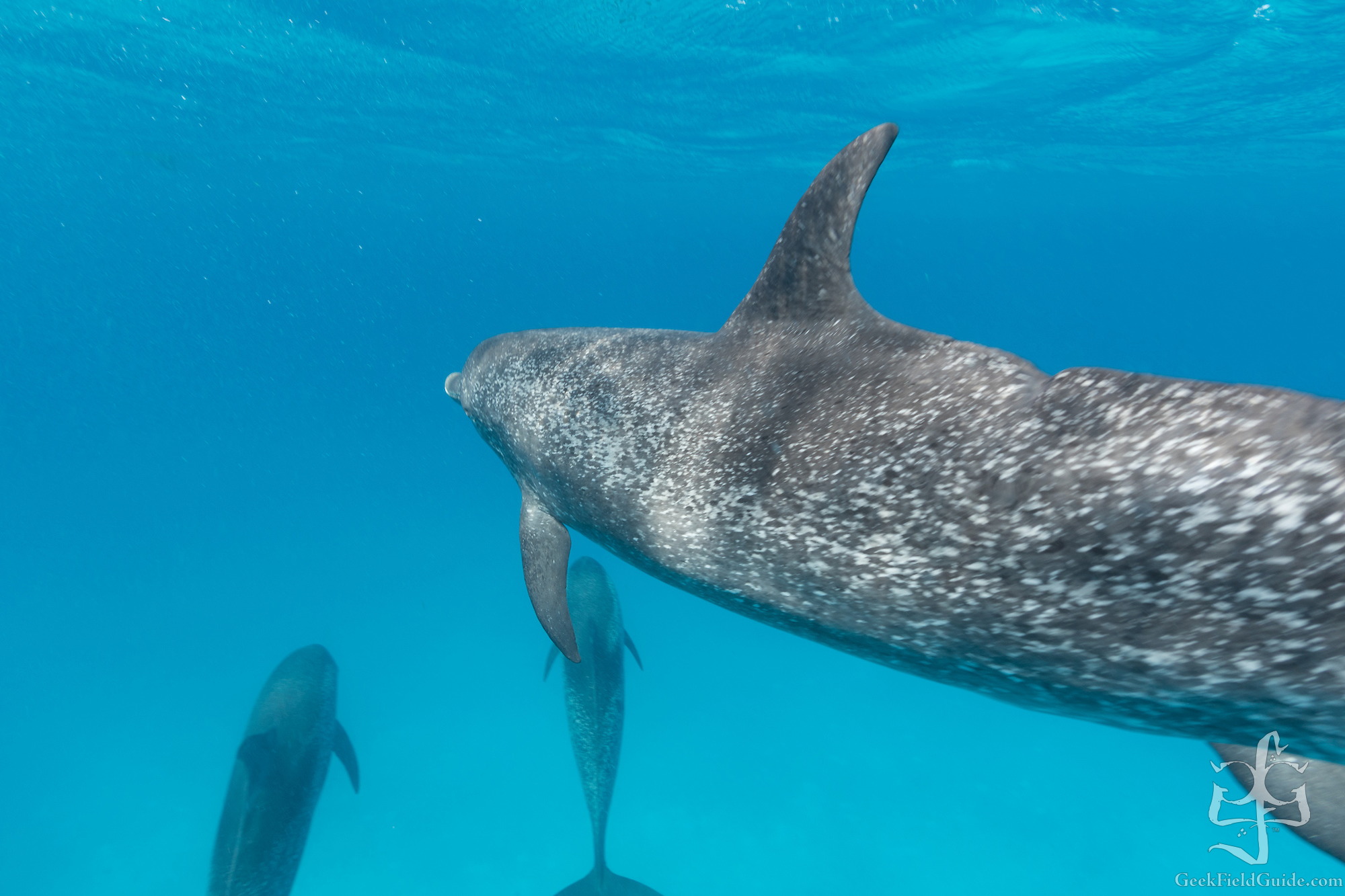 THIS close, to be specific. (Warren Schultz) Buy this photo 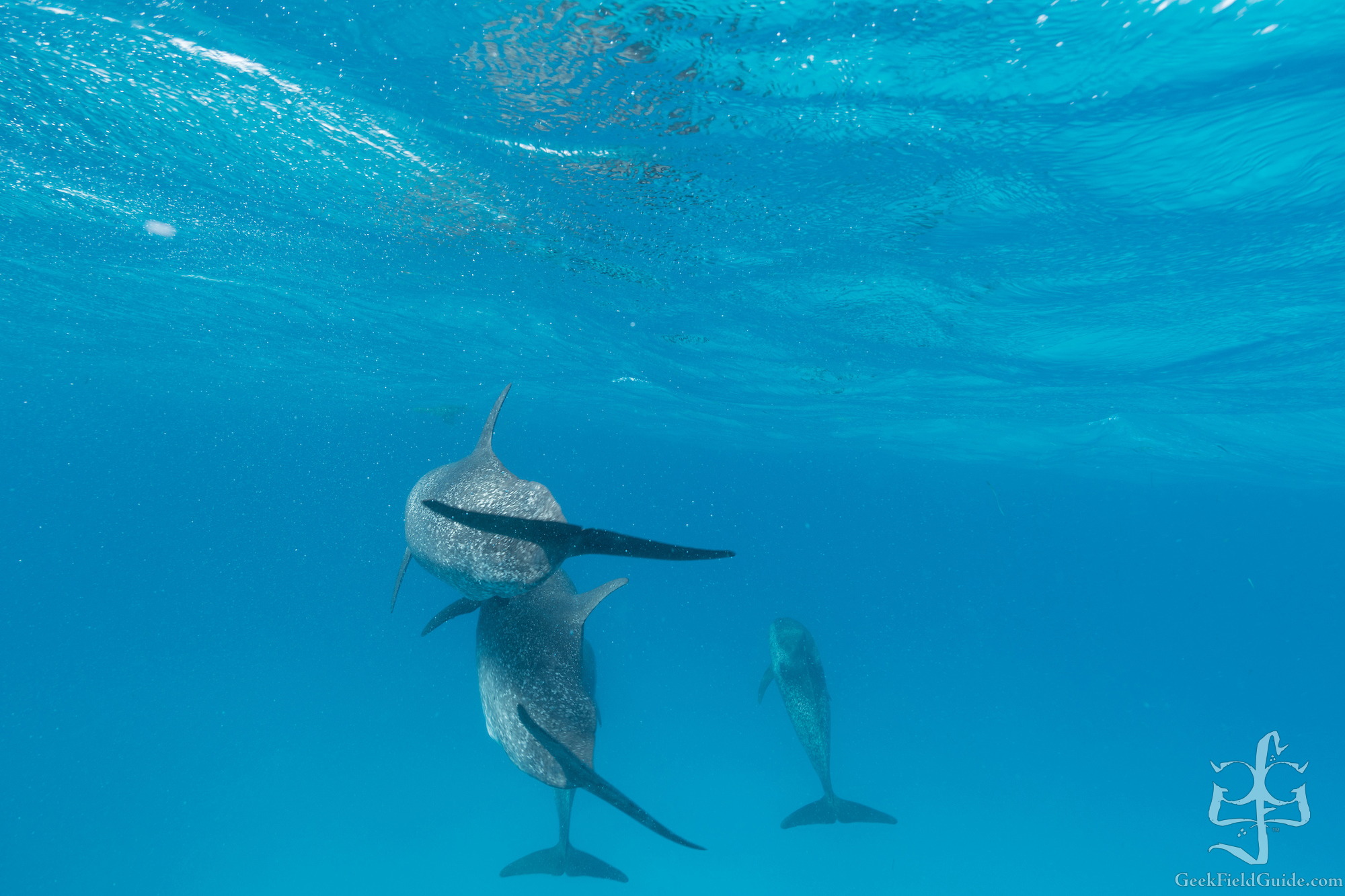 Departing dolphins, the theme for the day (Warren Schultz)Buy this photo 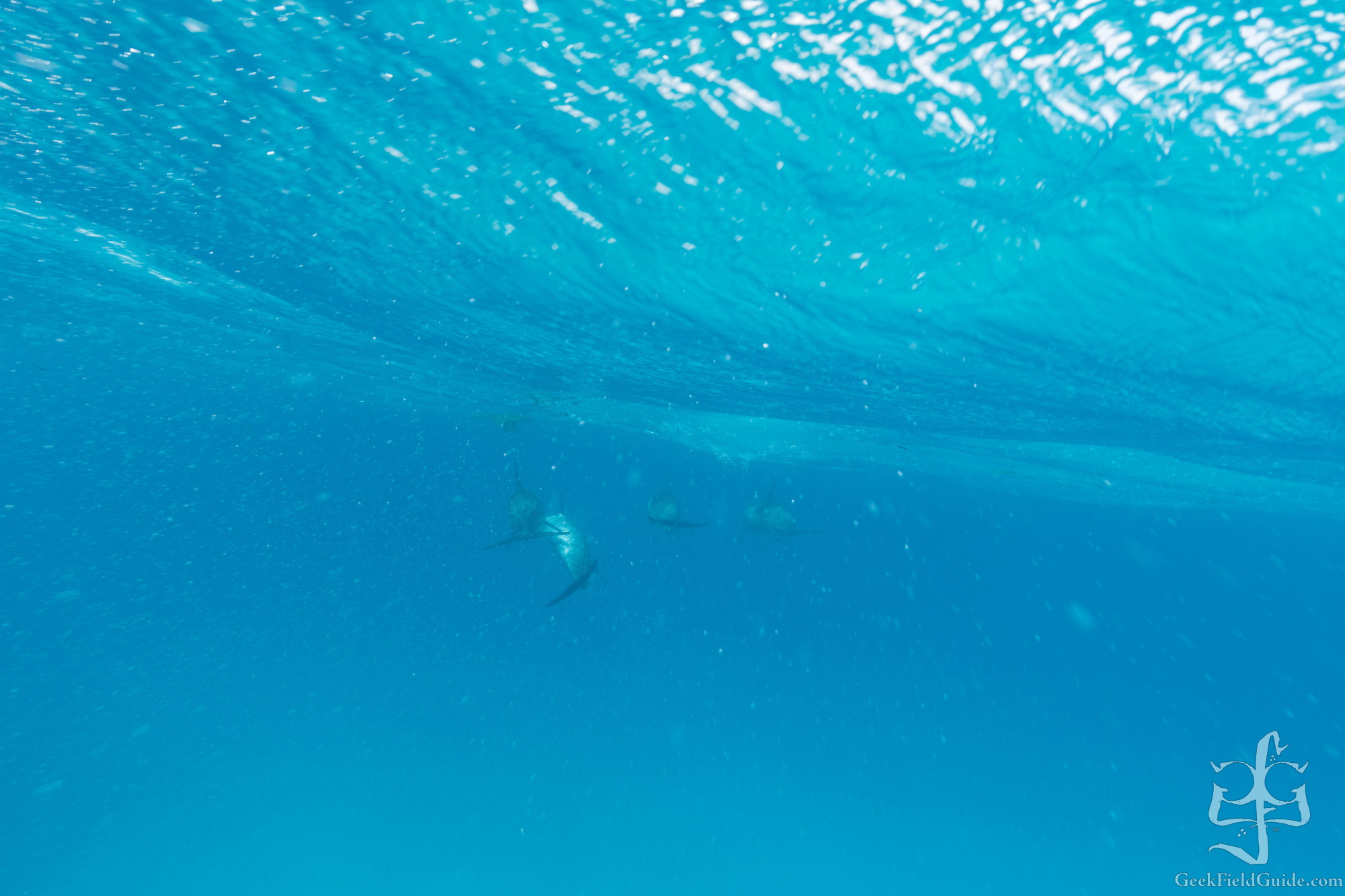 The time difference between the first shot of the dolphins and this one? Six seconds. (Warren Schultz) Buy this photo

How fast were they going? Like I mention in the caption above, the whole flyby took about 6 seconds, although you could hear them whistling long after they passed by and vanished into the blue. And yes, I had looked forward earlier. They appeared that fast as well.

It was disappointing to not get a better shot my first time in the water with them, but it was my first time in the water with dolphins, and I getting the photos I did isn’t too shabby. And yeah, it was very cool to see them that close. The fisheye lens on the camera makes things look farther away; I could have easily reached out and touched them as they went by. (Which we don’t do, because the dolphins don’t generally like contact.)

After spending a bit more time in the water for everyone to cool off (it was in the 90s, with high humidity), it was time to head back in. 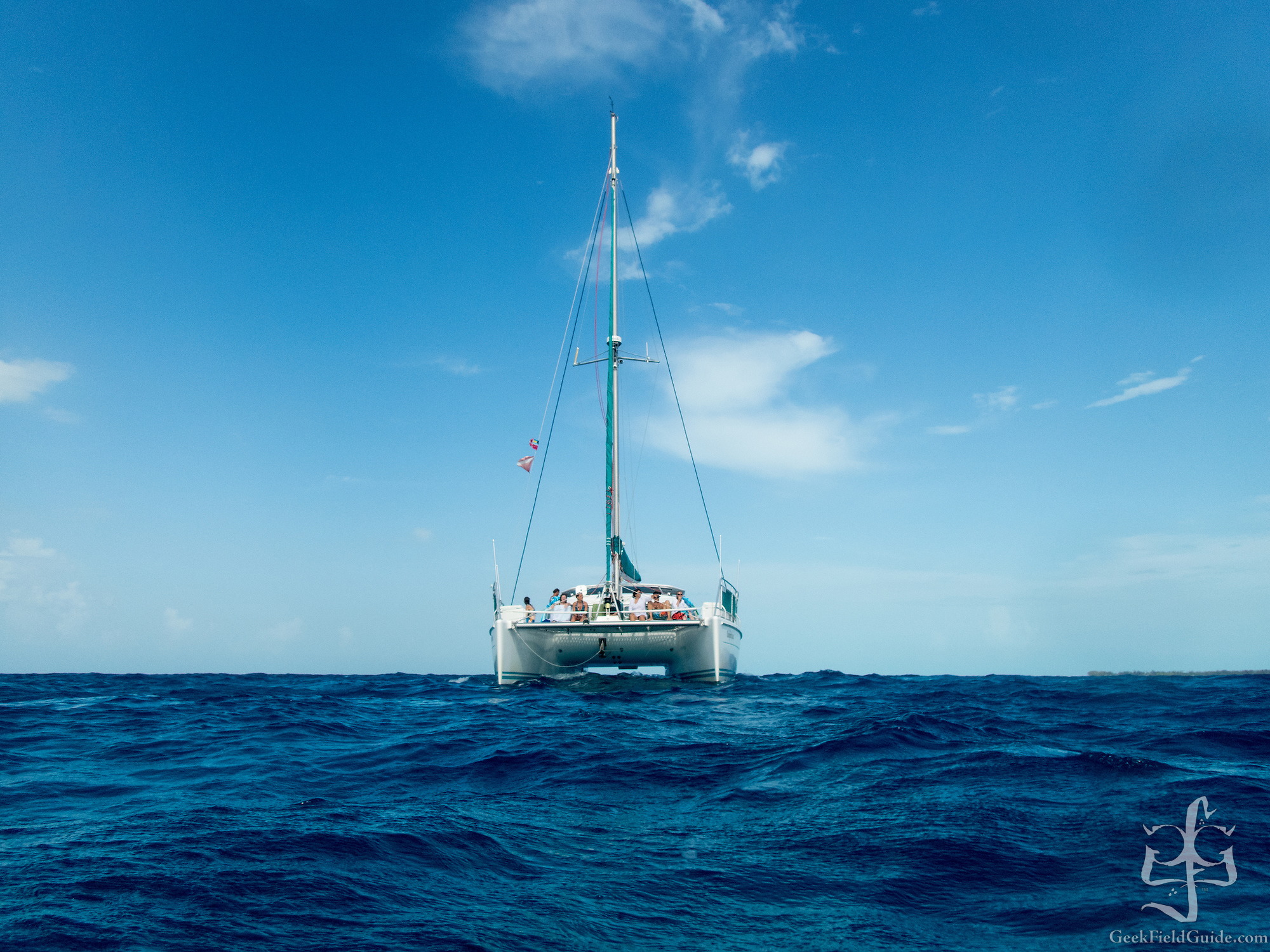 The DolphinQuest, our home for the afternoons. (Margaret Coin) Buy this photo