So, we got up early enough to hit Sunrise Point *at sunrise.* Go us! 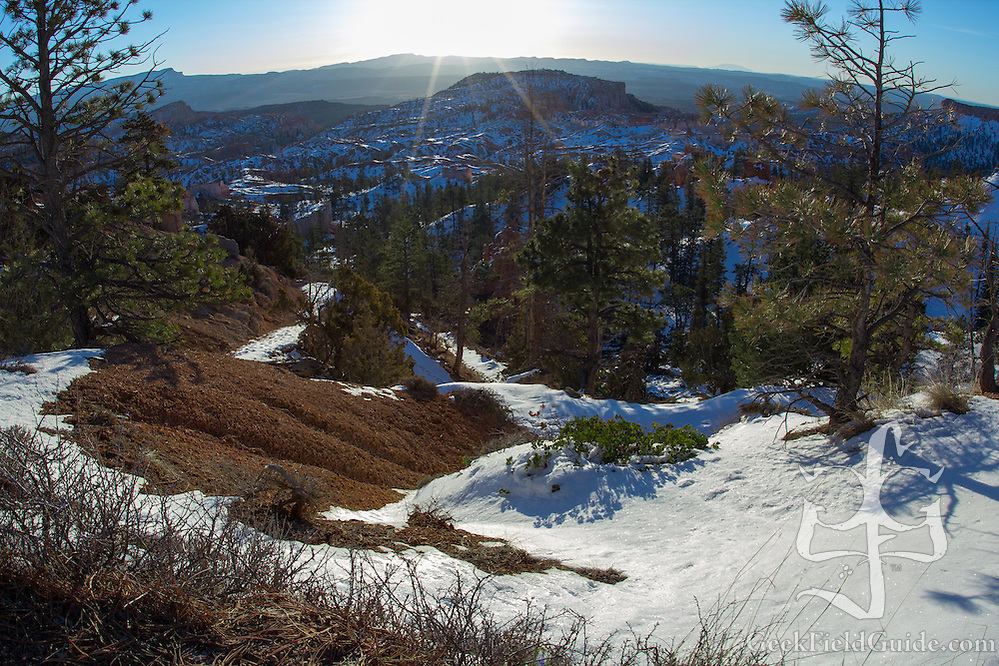 And I polished off roughly half the remaining donuts. Well, a girl’s gotta eat, folks.

And then, in the restaurant uploading photos… we had a Plan. Not just a plan. But a Plan.

We’d done the viewpoint reconnaissance, and the astrophotography, but we hadn’t had a chance to actually hike a trail yet. So I sold Warren on trying the toughest trail on the map. Because if we can sleep in the snow at 8000 feet, then we can hike 8 miles across a thousand feet of altitude change.

You may, at this point, be getting the impression that I do not think some things through. All the way. Before engaging in activities. This is not *entirely* the case. I have hiked a fair bit in my life and my experiences have led me to believe that this is a) fun, b) totally do-able and c) always the better for some extra mud and rock-scrambling. 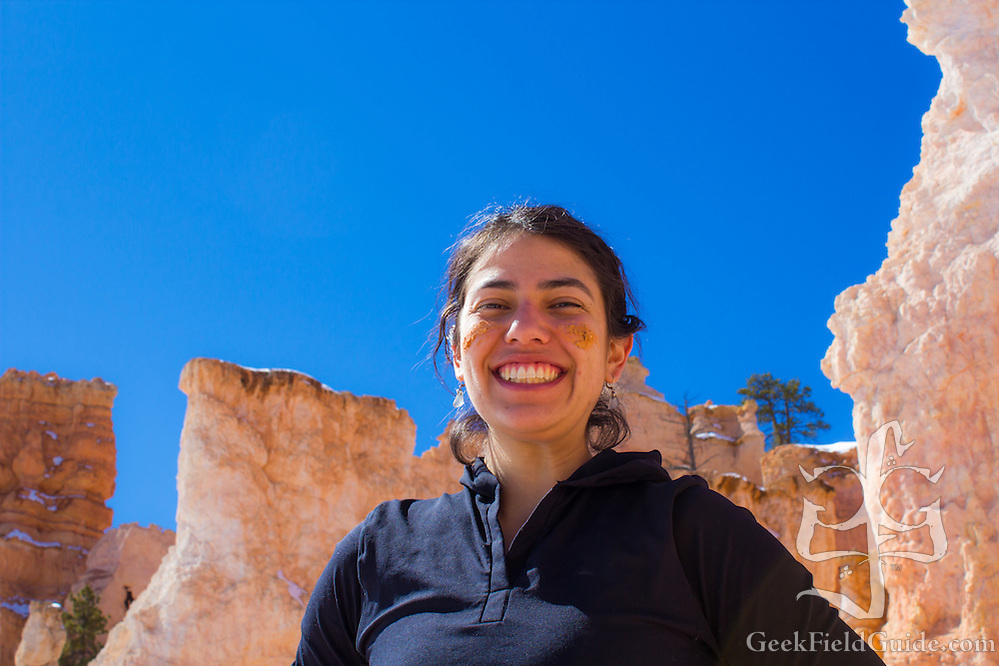 Beginning the Fairyland Loop, some of the immediate challenges became clear. For example, the trail starts on the canyon rim then descends down what might have been a goat-path. Or a well-groomed trail a foot or two wide. We could not tell which it was, since it was covered in 3 feet of snow. 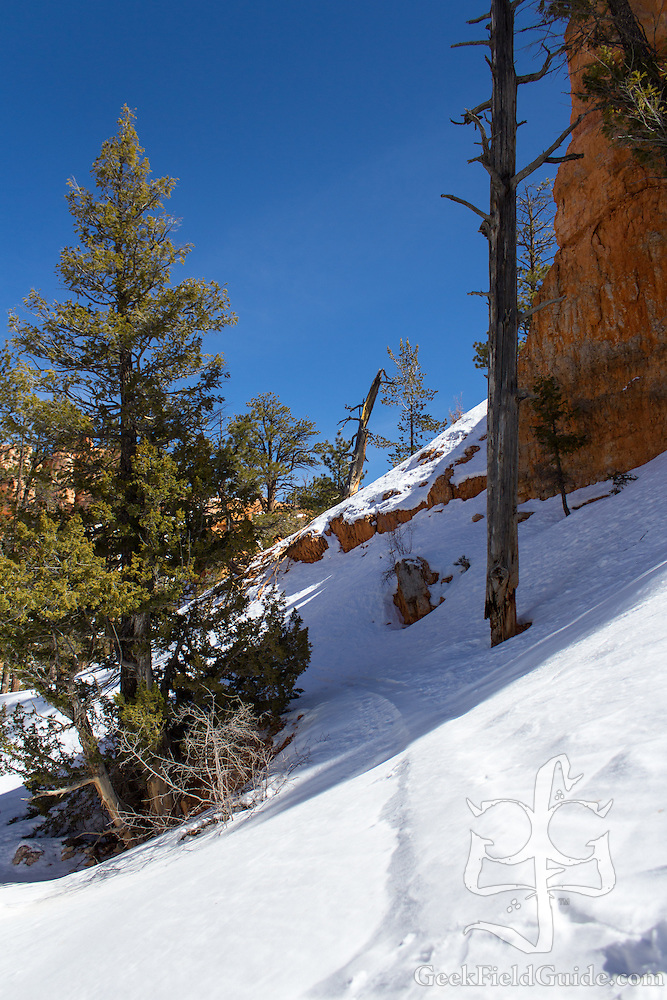 Depressions in the snow to the right are where the last poor schmuck fell, sank, extricated himself, and turned back. (Cynthia Kazanis)

Also, while my day pack was *amazing* and held only the things that I really needed, Warren brought along 25 lbs of camera gear, which made the descent a bit more challenging for him than it should have been. Well done, everyone. 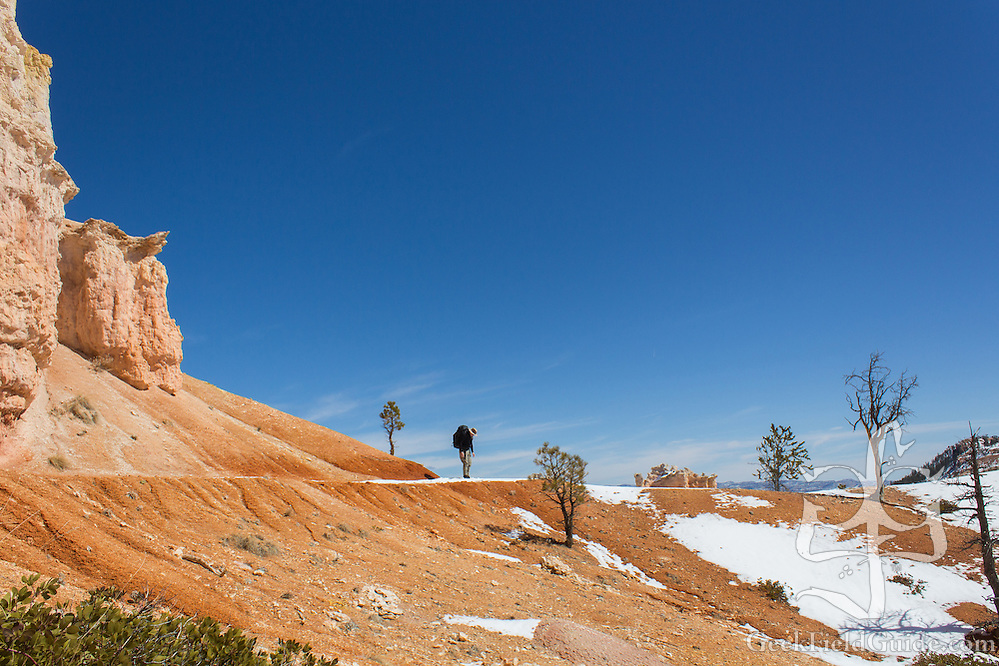 Between stopping to take photos, generally gawk-age and butt-deep snow, we made it to the first item of interest on the map (“Tower Bridge” formation, 1.7 miles in) and then had to turn around or risk losing daylight and doing the ascent without food (gasp!) in the light of headlamps. Yeah, sorry folks, not even if you *paid* me.

On the way back, we had to stop and rest several times. We also switched packs incessantly because otherwise we would not have made it back before sunset. But Team GFG was victorious, once again!

And once we trembled our way to the top? We headed back to the restaurant to upload the photos, of course! After taking a few of the gorgeous sunset, obviously…